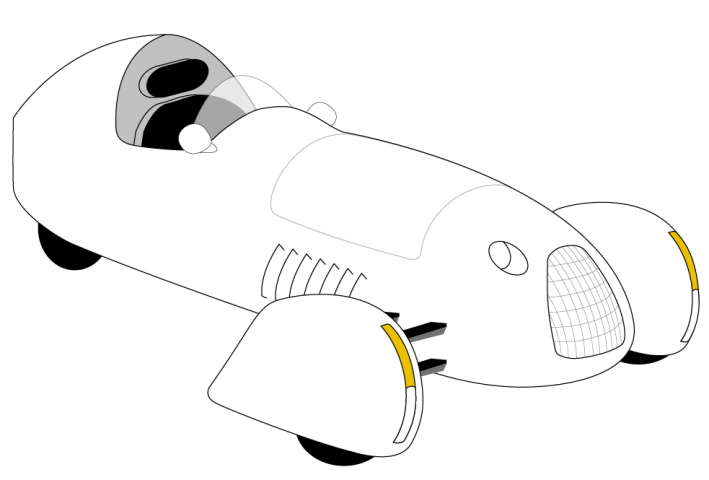 There’s been a lot of activity on the Streetliner drawing board this week. If you’ve been following along, you’re familiar with the shape above. This ’30s era race car inspired shape is what I’ve been showing people when they ask about what I’ve got in mind for this project. I love it, but I knew all along that this shape would inevitably change and evolve.

Likewise, one major aspect of the Streetliner’s design had yet to be worked out in concept: entry/exit. How the hell do I get in and out of the thing? It’s not that entry and exit is terribly complex, but in figuring out a good way to get in and out, it meant big adjustments to the exterior design of the car. So like any design undertaking, this needed criteria.

So starting with the current exterior design, a handful of things have been adjusted since I first penned Design Concept Alpha. The overall length increased, the front wheels got larger, the wheel pants got longer and no longer turn with the front wheels. I really like this shape overall. The snout shape of the front end is very pleasing, the rear has a lovely duck tail quality, and I especially like this design because the vehicle looks even better with its canopy on. All of that shape, however, is mated to an underlying safety cage and chassis:

With arches as the vertical pieces, the safety cage design is pretty straightforward. Heavy duty curved bulkheads are connected by heavy duty rails, then everything is cross-braced in a truss of smaller diameter steel. The angled front and rear main plates actually create rudimentary “crumple zones” where impact damage would send the motor assembly and or front suspension components under the vehicle in the event of an impact. This design is structurally sound, but it has one major flaw: how the hell do you get in and out of the thing? The height of the cockpit opening lip is right at 36″ in this design. I’m pretty tall, but that’s still quite a height to throw a leg over while getting in and out. I also realized that I’d only given myself a 24″ deep opening front to back. I’m not a whole lot narrower than that myself (it’s winter weight, I swear!). So the practical concerns of getting in and out of a high, narrow opening are pretty significant. But even beyond entry acrobatics, with such a narrow opening, I wouldn’t be able to see my hands or any cockpit gauges. That top opening needs to grow and dammit, I need a door. The tricky bit is how do I add a door without compromising the safety cage?

One thing at a time. I added an approximation of the front suspension “box” and see where and how that should tie into the frame. I lowered the bottom rails to tie in to the front and also simplify the rear subframe where the mono-shock would attach. I also moved the main roll hoop back just slightly where previously it was implied that it would overlap my shoulders. Upon further reflection, I realized that this being a single seater, I only need one door. Even though my diagrams here show the opening on the left side, I think I’m going to opt for the right side having the door. Since the majority of motorcycle accidents involve people violating your right of way from the left, it makes sense to me to leave the left side solid. That written, the underpinnings of the door as I’ve envisioned it are as substantial as the major parts of the cage. That way when it’s closed and latched, the door becomes part of the safety cage. I like to think of it like the harness that comes down and locks in when you get on a roller coaster. Solid. Also, thinking about an impact scenario, that’s a force into the cage, so if the door is structurally captive against being pushed through the opening, it ought to be as good as solid. With the door opening on one side of the vehicle, the canopy (when attached) could hinge along the opposite edge — making for a very easy time getting in and out.

With that adjustment made to the frame, the body shape needed adjustment, as you can see below. The opening needs to be increased to meet my design criteria for being able to exit the vehicle in a pinch through the top without using the door. The bottom profile of the body shape also needed to be adjusted to account for the front suspension box.

Now with the shape updated, I like it even more. The larger top opening not only gives the whole vehicle a better proportion. It looks smaller and more trim overall. Before now, with the length being about that of my MINI (which I know, isn’t exactly big), the Streetliner has looked strangely large. Now it looks much more like the race car cabin scooter it was always meant to be. I also reshaped and shortened the wheel pant to account for the door opening.

I really felt like the new shape came into its own with the canopy in place. Not only was it less bubble-shaped, but it completes the curve created by the tail. I can also imagine much better visibility and comfort within the cockpit. That led me to consider some alternate front end shapes. One of which was the sloped, Ferrari GT-style nose. It would borrow its hood scoop aesthetics from a different era than I’d previously been thinking, but I really like it. Forward visibility would be better and overall aerodynamics might be a tad stronger with this sloping approach.

All that remained at this point was to add some visual interest to these basic shapes. This included sculpting the rear and adding a sort of LeMons-style front lip to the wheel pants. I really don’t want to overlook subtle details throughout the shape. Sure, a perfectly smooth Velomobile kind of shape is terrifically aerodynamic, but without at least some minimal sculpting, I think the shape would look like it were stuck in the ’70s and just generally unfinished. These details will surely evolve as the project progresses, but I’m loving it so far.

As I look back on the progression, it’s amazing how much influence a little thing like a door can have, but all for the better! This shape still has a lot of classic Italian sensibility, a lot of race car mojo, and plenty of salt flats shape credibility. As much as I love the ’30s sensibility of Concept Alpha, I like this even better. But more than that, I’m glad to have another big piece of the conceptual design puzzle in place.