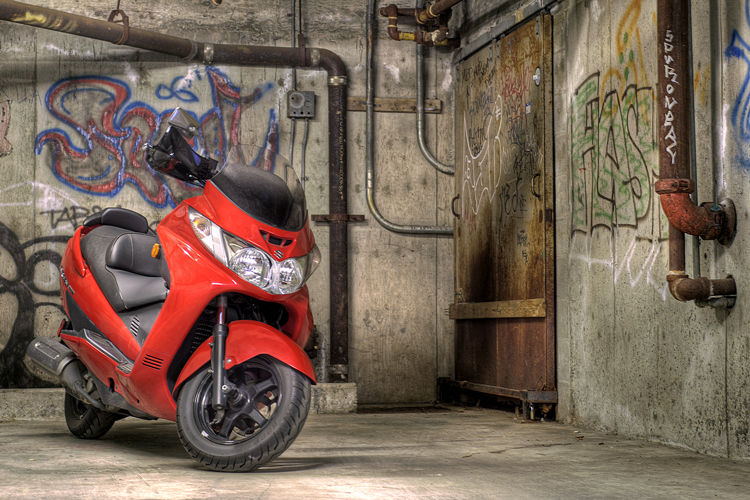 So at some point in this process, I’m going to have to decide on a power plant forProject Streetliner. My plan is to purchase either a used scooter, or one or more wrecked scooters to scavenge for parts. The question is, which one? The thing is, as I’ve researched this project more in-depth, I’ve realized that there’s more to be had from the right donor bike than just the rear end. Part of this project is to minimize the amount of custom engineering I’d have to do. Whatever I wind up with, I also want to stick to that bike (or at least that brand) as much as possible so that I can minimize the number of spare parts sources I have to manage. In a lot of ways, this ceases to be a scratch vehicle, and becomes an elaborately custom scooter. I like the sound of that! Components should really include:

Brakes
Obviously the rear brake disk and caliper are already part of a scooter rear end, so that’s handy. But what could and really should also be harvested from a donor scooter are the front brake components (calipers, disks, wheels, lines) and both brake master cylinders as well. Ideally, I’d like to use a bike that has either two front wheels (such as the MP3) or dual disk front brakes on the single front wheel (such as the Aprilia Sportcity, or the Suzuki Burgman). That would ensure that the brakes are already balanced and matched to the wheels and that the master cylinder is already beefy enough. Some maxi scooters also include a parking brake, which would definitely come in handy on a 3-wheeler.

Wiring, switches, controls, telemetry
Harvesting the wiring harness, gauges, and other goodies out of the bike would save a ton of work. It’d be pretty dumb not to utilize the gauges, the hand controls, and other switches and such that have already been engineered to work together on the bike. Why wire up a custom circuit for turn indicators when there’s one already built into the donor bike?

Wheels and tires
There really isn’t much interchangeability to scooter wheels and tires. There’s not the aftermarket for rims and such like there is for cars. So I’m likely to be stuck with the wheels and tires native to that scooter. One exception I know of is the Piaggio QUASAR engine line that is shared between Piaggio, Vespa, and Aprilia bikes. The 12″ wheel of the Piaggio MP3 could be plausibly swapped for the 16″ wheels of the Aprilia. The main advantage there is that swapping to the larger size effectively makes the end gear ratio higher (and therefore adds to fuel efficiency).

So when it’s all said and done, the only parts of the donor bike I wouldn’t be utilizing are the front fork, lights, the handle bars themselves, the majority of the chassis structure, and the seat. That’s it! The last lingering question for me was engine size.

I’d originally envisioned this project to utilize a 250cc scooter engine such as what’s shared between the Vespa GTs 250, Piaggio MP3 250 and Aprilia SportCity 300i. That, or a similar 250cc engine from Honda, SYM, or Kymco. A 250cc motor is kind of the sweet spot between performance, weight and fuel economy in the scooter world. The MP3 seems an ideal choice for the obvious reason that it’s already a leaning trike. The MP3 also comes in 400cc and 500cc versions should the need to up-size arrive.

Speaking of which, I’m pretty sure at this point that up-sizing is inevitable. This is mostly because of the likely weight of Project Streetliner. My design criteria is to stay below 600 lbs curb weight. Scooters in the 250-650cc engine classes tend to weigh in between 340-550 lbs. Thing is, it’s not speed I’m concerned about, it’s economy. You see, a small engine having to work really hard will usually get worse fuel economy than a slightly larger engine that isn’t having to work so hard. (For example, on a racetrack a BMW M3 gets better fuel economy than a Toyota Prius when both are driven at the Toyota’s quickest speed.) So if my vehicle does indeed weigh 600 lbs, a 400cc engine will likely get better mileage (and conveniently give more power) than a 250cc.

So that brings me to my latest bit of hands-on research. I stopped by the local Suzuki dealership to look at a Burgman 400 — a bike considered by the folks who like such machines as the premier maxi scooter on the market. It seems perfect! The Burgman is the front runner right now for a couple key reasons. It already gets the mileage I’m shooting for, weighs in at 474 lbs, has dual front brakes, and a great reputation. Looking it over, it’s now the definite front runner in my search for a donor bike. What’s more, Suzuki has sold a boat load of them so there ought to be plenty around in the secondary market. That certainly can’t be said for the MP3, I’d wager. Anyboy have any other suggestions?