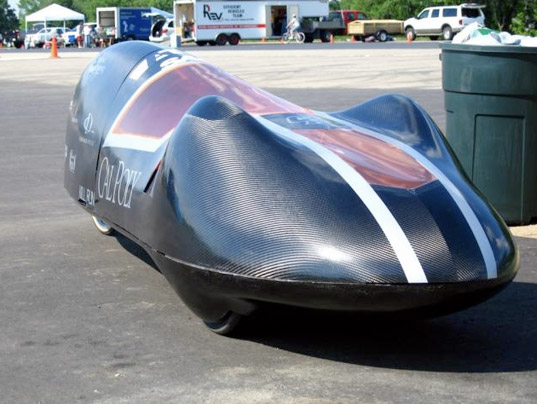 The Black Widow, as it’s called, is the winner of the Shell Eco-marathon. Looks the business doesn’t it? What’s thoroughly amazing is that they did it without any electrical propulsion at all. Just a 3 hp Honda 4-stroke engine no doubt geared to the ceiling. Good stuff. More details here. 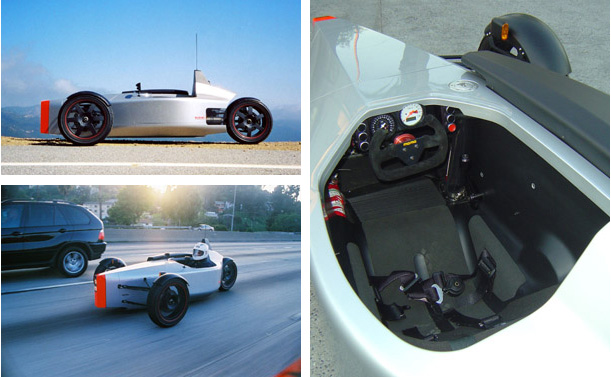 Here’s a very different execution of almost the exact same concept of Project Streetliner. I can’t help but wonder about ground clearance issues though, looking at that front end. 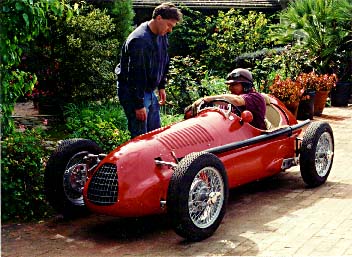 Fellow MINI enthusiast Lavardera shared this fabulous site about Cycle Karts — a whole class of DIY automobile that I didn’t know about before now. Fantastic stuff. I especially love this one.

Another gem from the fine folks at the Yahoo! Tilting Vehicles group. Amazing how long ago this was. It looks SO much like Luke’s Tatooine speeder from Ep 4. In the past few days I’ve had a terrific email exchange with Bob from Tilting Motor Works. His company has developed a fascinating kit to convert essentially any standard motorcycle into a leaning tadpole trike. But more importantly, he’s done over 10,000 miles of real world road testing on his tilting suspension design. I asked him if directly linking the shocks to each other had any adverse effect on handling. Specifically, I wondered if hitting bumps while leaning or in other tricky positions would give the vehicle any proclivity to change course suddenly or alter its tilt. This was his response:

Yes, the force can be transfered directly to the other wheel but my experience shows me that it is no issue even while cornering or going over railroad tracks.  Actually all suspensions ultimately transfer the force to the other wheels, just not as directly. I tested my suspension by laying 2×4’s all around my cul-de-sac and running over them at different speeds and angles.  The bike performed great.

This is such great news! A front suspension setup similar to what Bob’s developed seems the perfect match for Project Streetliner, but I didn’t know how capable that kind of dampening really was. I also asked Bob about comfort and he was happy to report that his front end is far more comfortable than stock and that his VMax prototype is always his first choice in a stable of fun vehicles. He’s graciously offered his time and expertise and I’ll be giving him a call very soon. Thanks, Bob!

I got an email a few days ago from Bob over at Tilting Motor Works. His tilting trike system is designed to be bolted onto the front of virtually any motorcycle. It appears to be using the same basic geometry as the German Tripendo recumbent bicycles and the Aprilia Magnet concept trike. His 10,000 miles of road testing seem to be a pretty sound endorsement for this kind of geometry. Good stuff. $10k is definitely beyond my budget for Project Streetliner, but I appreciate Bob reaching out and hope to still have him involved somehow. 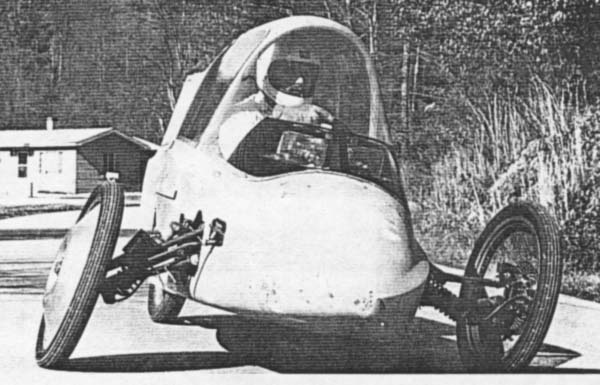 A fascinating cambering 3-wheel vehicle prototype from the ’80s