So the seed planted by Aaron to use ATV drivetrain is growing into something cool. On twitter, @blalor suggested Honda’s line of TRX sport ATVs. They’re 2WD, chain-driven, EFI, and possibly perfect. I keep eyeing the 400 and 700 models. Both are single-cylinder “thumper” motors with a wide bore and thereby tons of available low-end torque — which will come in handy once I gear it up. I wish Honda were more forthcoming with horsepower numbers, but I’m not finding any. That’s but a detail at this point though.

This ATV setup lets me do a couple things. It lets me run a larger motorcycle wheel and tire on the rear. That gives me higher gearing than both the scooter drivetrain and the original ATV setup by default. Rear sprockets are very easy to change, and this gives me lots of latitude in adjusting the final gear ratio of the drivetrain without touching the actual transmission. Reading up on the TRX specifically, there are aftermarket solutions for high performance exhausts and apparently it’s pretty straightforward to re-map the EFI. That should let me tune a “butter zone” where the motor is at it’s most powerful in its high ranges and it’s most efficient in its low ranges. That way under acceleration, I’ve got plenty of power, but while cruising, it should just bump over and sip fuel. What could be even sweeter is if I could set up a switcher box of some sort that would let me pick between two EFI maps on the fly. One for power, the other for efficiency.

One thing I was very curious about was how the chassis would need to change in order to incorporate a separate engine and rear swing arm. One of the simple beauties of using a scooter drivetrain is that the engine, transmission and rear suspension are all basically one big piece. This is simple, but it isn’t automatically light and there’s no reverse gear option. So what happens when I swap out for an ATV/motorcycle rear end? 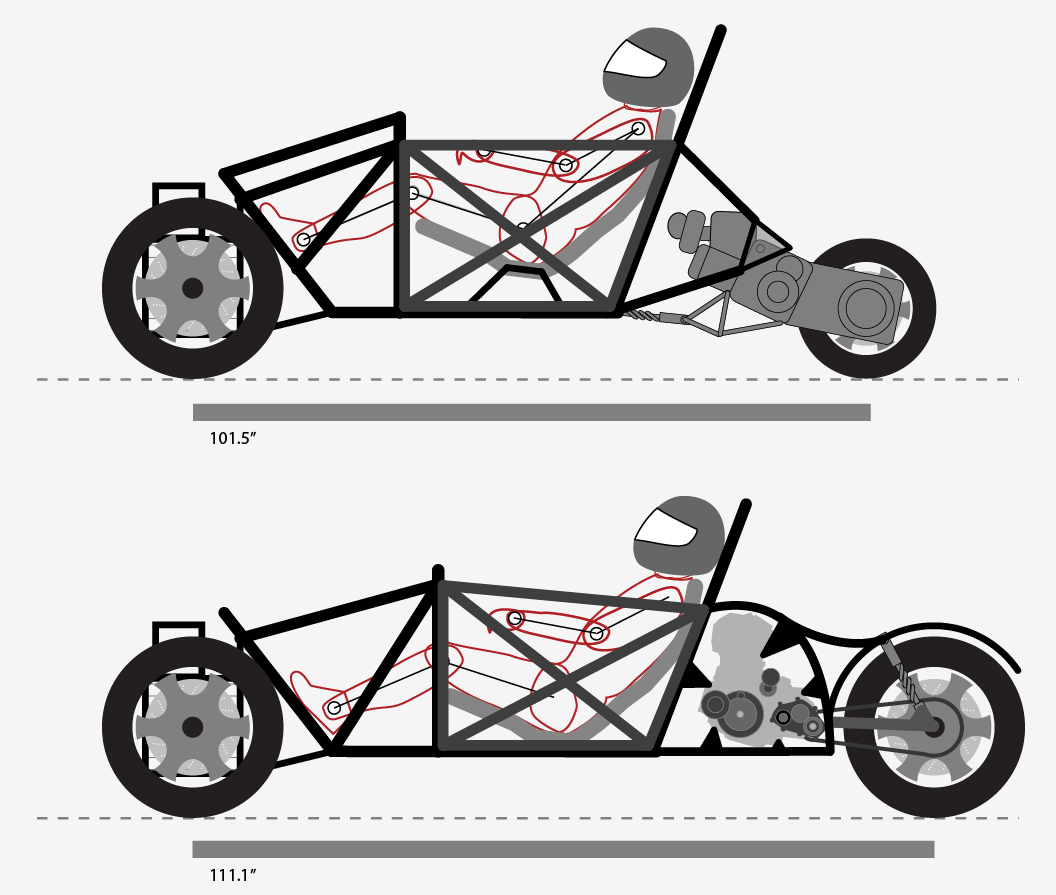 I found some reference images of the TRX700xx powerplant and rendered up a quick cross-section. This image compares the original concept Suzuki Bergman powerplant with the TRX. Everything is approximate, of course. The other key shift in this rendering is that I dropped the seat height basically to the floor. This to decrease the forward cross-section that much more. The trade-off is adding about 10″ to the wheelbase between the two changes. This puts the length at about 3″ longer than the wheelbase of BMW 3-series coupe. Not bad, considering it’ll present about 1/3rd the frontal area.

The next question was obviously what does this do to the body shape? Making the hood line lower and the tail longer did some neat things for the side shape of the body. I especially like how that big wheel looks in the rear. The overall effect is really slick. I can’t wait to model this in foam or pine and see what it looks like in 3D. More to come.