I’m in the middle of making a small-scale aesthetic prototype, which I’ll post about later, but in the midst I made this little video showing how the double parallelogram tilting front suspension works. The prototype is made out of black foam core with hockey tape in the joints. Bone simple, very cheap and easy to modify. More on that later.

I’ve had these videos for a few months but have had a bitch of a time getting them off of my iPhone in their entirety. Finally DropBox came to my rescue and so here they are. The quality isn’t great, but you can see some of my progress toward turning an old R/C helicopter into the first small-scale prototype for the Streetliner. Since shooting these, I’ve actually reworked the rear swing arm in brass and have abandoned the profile-style chassis. Even still, this is a good look into where I started on the SSP. Enjoy!

I got an email yesterday morning asking essentially “where the hell have you been?” and it’s a very valid question. Things have been quiet here at Project Streetliner for the past six weeks or so — not for lack of activity, but for other priorities. The Mrs and I bought a pair of three-decades-old Honda motorcycles for a laughably small sum of money about a month ago. We wanted to be able to wander the tri-state area the way we can wander the Twin Cities on our scooters, and now we can. Or at least, we’ll be able too after I do a little more wrenching. So work on the Streetliner R/C prototype has paused until I get these machines sorted out, but that should only be a few weeks. The flip side of this, however, is that these being my first interaction with the mechanicals of proper motorcycles, I now have a much better understanding of this sort of machine. This can only help me make better decisions on the Streetliner. As I’ve gotten more familiar with the simplicity of these machines (especially these early ’80s Honda bikes we’ve got), I’m considering a lot more motorcycle components in my end vehicle. I’ve even toyed with the idea of changing from scooter to motorcycle drivetrain. The cost savings alone are pretty compelling. But that’s a bit rash at this point. We’ll see.

Sorry for the long silence, progress is indeed being made. In the mean time, please enjoy some snapshots of my R/C prototype in-progress. I’ve since re-made the rear swing arm almost entirely out of brass and abandoned the profile body, but these first efforts were very enlightening.

I’m trying to answer a radio transmitter programming question. I’m familiar with R/C systems from flying R/C aircraft when I was a kid, but we never really flew anything that was complicated enough to need a programmable transmitter. For the Streetliner R/C prototype I’m working on right now, I have sort of a unique control challenge I’m not sure how to solve.

I plan to include a tilt lock system on the R/C prototype (RCP) similar in function to the tilt lock mechanism I have planned for the full size vehicle. That is, an on-demand way to lock the front suspension tilt and keep the body from being able to lean. This for low-speed maneuvering, stop lights, and parking. The R/C mechanics of this are simple enough — just dedicate a servo to push in a pin or some other mechanical stop. The problem is, because this is a free-tilting vehicle that will turn via counter-steering, once I lock the tilt, my left/right control will actually be reversed (since you turn left to lean right on a motorcycle or similar single-track vehicle like this). By locking the tilt, I’ve returned to conventional steering.

So what I’m trying to figure out is if that’s something I can program. Can I set up my radio transmitter such that when I flip a switch, the tilt lock servo actuates whatever it actuates AND the steering input reverses? In a way, I suppose it’s similar to the pitch control reversal on the “inverted mode” switch for an R/C helicopter (which I’ve just realized that I have one of those just laying around! Insert maniacal laugh! Bwahahaha). Trouble is, that’s on the pitch axis, not the roll axis and that inversion does not also push a servo to do anything. It also reverses the blade pitch, which isn’t quite what I’m after either. Or would that work?

Any ideas, internet? Anybody program a radio lately?

Here’s how things are coming along so far. I’d originally imagined that I’d create the whole chassis setup out of soldered brass tubing in an effort to simulate as much of the full-scale structure as possible. I’ll probably still do that, but for this prototype I realized that I still need to evaluate a lot of the big-picture stuff. I need to verify that counter-steer leaning actually works. I need to see what effect rake angle has on the handling and stability. I also need to build these trickier components — like the steering knuckles — so that I better understand them. It isn’t that the full-size pieces will be exactly the same, but by building them at all, I’ll understand them better.

In the past, I’ve also written about the concept of a treadmill prototype. The idea was to go dead simple and just knock something up to demonstrate the front suspension. That would then have some sort of cable-driven steering input and the idea was to tether that model to a treadmill and see how it behaved. Now that I’ve got it knocked up to an extent, I’ve realized that I won’t be able to do that to the level of precision I’d need to in order to have something useful. So I’m going to do it as a radio controlled prototype so that I’ll have adjustability and precision inputs. I’ll be able to actually drive the thing around. My construction style for now is mostly 1/4″ ply, brass tubing, #6-32 hardware, and then miscellaneous pieces of brass hardware. The body will be in profile and should allow me to mount all the servos, batteries, and other gear needed to turn this into a real test platform.

The most fun I’ve been having with this is not even in the actual build, but in the days on end spent thinking through how to execute some of the precision mechanical pieces needed to do this. What I’ve arrived at is a combination of brass tubing, brass hardware and then soldering everything together with as much precision as I can. Brass is soft enough that I can sand it to precision, and the soldering lets me build surprisingly complex joints that are tough enough to stay together without being sloppy like wood or plastic. In time, I probably will do a true miniature Streetliner made out of brass tubing and even with a scale body in place. But first things first — have to prove that it works first.

Hey folks. Just a quick update that things have not in fact gone cold in The Lab of Doom. I’ve started a small-scale proof of concept prototype and will have a more comprehensive update on that shortly. Stay tuned.

In looking online for brass tubing, I found SmallParts.com. Not only do they carry numerous lengths and diameters of brass tubing, but also bearings, belts, gears, and all manner of great little precision parts. They’re going to come in very handy as I build my small-scale prototype(s). 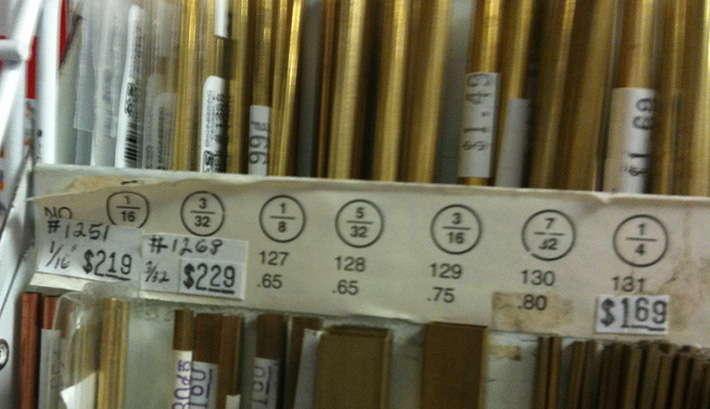 I’m currently collecting parts and materials for a small-scale functional prototype. I’ll be using 6″ diameter wheels up front and from that I’ve been scaling down dimensions from my design graphics to match that proportion. Presently, my small-scale prototype will be 22% the size of the real deal. That’s not quite quarter scale, and should be plenty big enough for me to build most components in about the same way they’d be built in full size. If I also scale my materials as much as possible, it’ll give at least some idea of structural rigidity (although not material rigidity). More importantly it’ll hopefully reveal the majority of mechanical complications. I’m going to use brass tubing because it’s inexpensive, readily available, and I can solder it together similarly to how I’d weld the real thing out of steel. I can also easily bend curves and other complex shapes without too much effort

So at 22% scale, my equivalent brass tubing sizes are as follows:

These materials should be lightweight enough to be easily workable. Once it’s all soldered together, it ought to be pretty sturdy. I’ll be able to find small bearings, bushings, and other hardware at the local R/C car shop. Now that I have both a working band saw and a drill press, I should be able to fabricate pretty much anything at that scale. I wonder if I could even mill parts on my dremel press from solid brass if I take small bites. We’ll see.